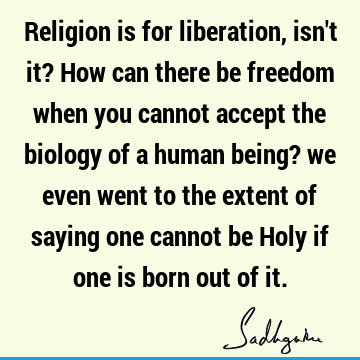 Religion is for liberation, isn't it? How can there be freedom when you cannot accept the biology of a human being? we even went to the extent of saying one cannot be Holy if one is born out of it.

[About maligning of Sex by some religions] Religion means freedom. How can there be liberation, how can there be freedom when you cannot even accept the biology of a human being?

Religion is not about belief-system. All religions started as a method to turn inward. An inward step can be taken only by an individual. It's a very intimate thing; But when people try to organize this inward step, naturally it gets distorted.

If you are a believer, you know your God is waiting for you when you die, why don't you go? why are you delaying your progress towards God by going to hospitals? It is because you are not a true believer