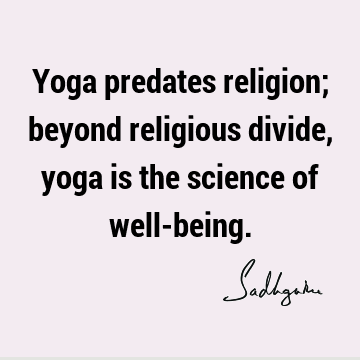 Yoga predates religion; beyond religious divide, yoga is the science of well-being.

Yoga means to be in perfect tune. Your body, mind and spirit and the existence are in absolute harmony

The word yoga means union. Yoga is not a religion. We looked at the Universe and saw union

Yoga is an absolutely scientific approach to the inner dimensions of a human being. Yoga is the science for the future.

Devotion is when you hold the wellbeing of others above your own.

Short One liners Devotion Well being

Whatever kind of business you are into, ultimately, there is only one business, that is human well-being

Being human Well being