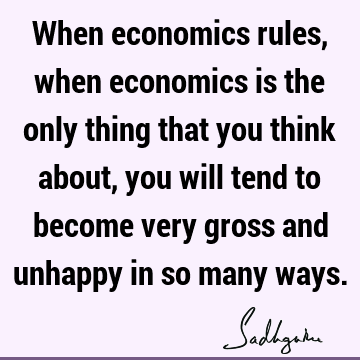 Economics is important, but if it becomes the fundamental driving force in our lives, we naturally become suspicious of everything around us

In African lore there is a saying, ‘When the lion feeds, everybody else gets fed.’ So if you’re a lion, you have a big capability. When you feed, it is the laws which should make it in such a way, if you make profit, everybody should live well.

We have made economics the most important aspect of human societies, economics has a place in our life for sure, but it is not the be all of life. Feminine doesn't belong to that dimension. If aesthetics of life was dominant in a society, if aesthetics was as important as economics, Feminine would be naturally exuberantly alive & manifest in the society

Right now because we have made the whole world into economics unfortunately women also getting as stupid as men. As if how much money you earn is going to determine the value of your life