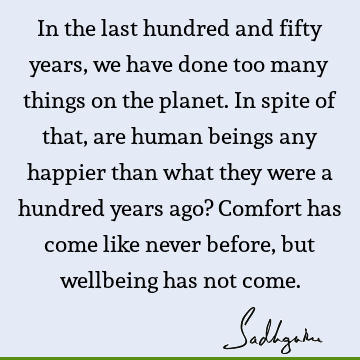 In the last hundred and fifty years, we have done too many things on the planet. In spite of that, are human beings any happier than what they were a hundred years ago? Comfort has come like never before, but wellbeing has not come.

Every worm, every insect, every animal is working for the ecological wellbeing of the planet. Only we humans, who claim to be the most intelligent species here, are not doing that

We are always busy seeing how to fix the world. The world need not be fixed. If we generate the right kind of human beings, the world will be a wonderful place to live in

Being human Well being World

The way we are treating half the humanity on the planet, it looks like we are hell's angels... we have left a large part of the human population in physical pain. Pain of hunger, disease, and injury.