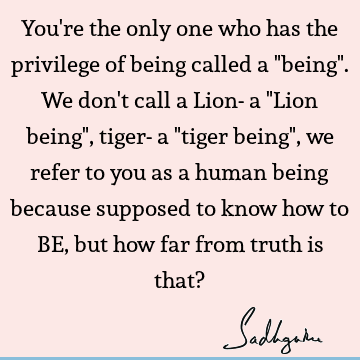 You're the only one who has the privilege of being called a "being". We don't call a Lion- a "Lion being", tiger- a "tiger being", we refer to you as a human being because supposed to know how to BE, but how far from truth is that?

You are working towards somebody else's idea of success, that is not a success, your success is you as a human being you found your full potential, that is your success

Not disaster or disease, stagnation is the worst thing that can happen to a human being

Once I believe what I believe is the truth, naturally, I will try to impose it on other people. I don't call it an imposition, I call it saving you from ignorance, I will try to put it on to you, just to save you, not to hurt you, but you will get hurt anyway because any imposition hurts