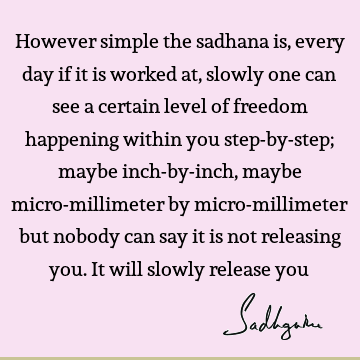 However simple the sadhana is, every day if it is worked at, slowly one can see a certain level of freedom happening within you step-by-step; maybe inch-by-inch, maybe micro-millimeter by micro-millimeter but nobody can say it is not releasing you. It will slowly release you

People have a completely messed up idea of what freedom is. Giving in to your compulsions is not freedom

If people choose to make misery out of themselves, what can be done? That's not Creation's fault. Creation just gave you the freedom so that you could go beyond.

If someone else determines what happens within you, it is the worst form of slavery

you shouldn’t stand in a line of resentful people. You should stand alone in true freedom. Freedom doesn’t come because of political processes or economic processes. Freedom comes when nobody can incite an unnecessary quality in you, no matter what they do.

A Tiger is not making an attempt to be a good tiger, if he just eats well, he is a good tiger,everything else is fixed within him by nature, when you are born as a human being whether you grow up into a good human being or terrible one is left to you