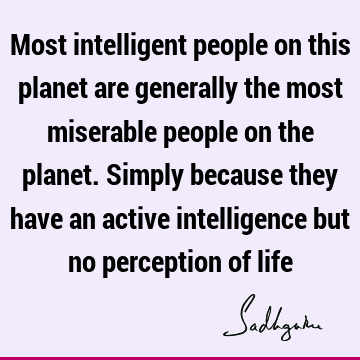 Most intelligent people on this planet are generally the most miserable people on the planet. Simply because they have an active intelligence but no perception of life

If you go on thinking about life, there will be no life left in you. The only way is to live it, to experience it, and to enhance your perception of life

If God was against intelligence, if he did not want you to use it, he wouldn't have given it to you

If you do not identify with the memory you have gathered, then you have access to a very different kind of intelligence

The third eye does not mean someone's forehead cracked and something came out! It simply means another dimension of perception has opened up

A truly intelligent mind is neither influenced by memory nor deluded by imagination.