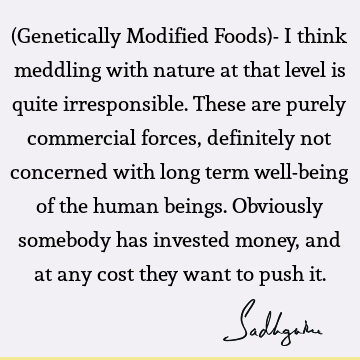 (Genetically Modified Foods)- I think meddling with nature at that level is quite irresponsible. These are purely commercial forces, definitely not concerned with long term well-being of the human beings. Obviously somebody has invested money, and at any cost they want to push it.

A Tiger is not making an attempt to be a good tiger, if he just eats well, he is a good tiger,everything else is fixed within him by nature, when you are born as a human being whether you grow up into a good human being or terrible one is left to you

What we call as technology today is that - 'within the laws of nature everything that could be taken charge of someday we will take charge of.'

Once you're not able to think beyond your biological identity, the very nature of being human, the immensity of being a human is constrained and constipated into a very small process.