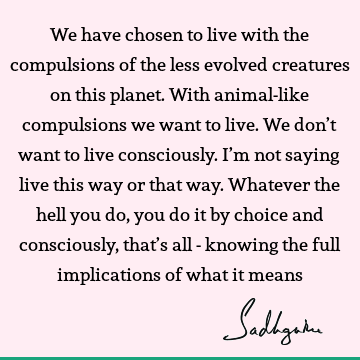 We have chosen to live with the compulsions of the less evolved creatures on this planet. With animal-like compulsions we want to live. We don’t want to live consciously. I’m not saying live this way or that way. Whatever the hell you do, you do it by choice and consciously, that’s all - knowing the full implications of what it means

The essential possibility of being human is that we can act out of our intelligence, love, and compassion, rather than out of compulsions