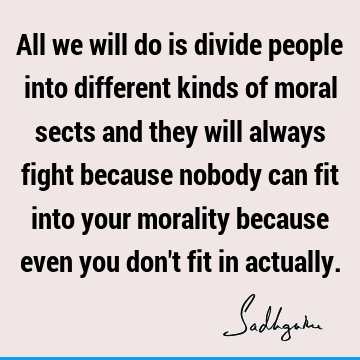 All we will do is divide people into different kinds of moral sects and they will always fight because nobody can fit into your morality because even you don't fit in actually.

Do not try to build your life on ethics, morality or values. Bring clarity of perception into your life. Learn to see everything just the way it is

There is no need to create a silly sense of order by establishing your own principles, morality, or ethics. Existence is in perfect chaotic order.

Religion is the Opium because it puts people to sleep. Sleep is comfortable, nothing wrong with it, Death is even more comfortable (but there is no progress in it)