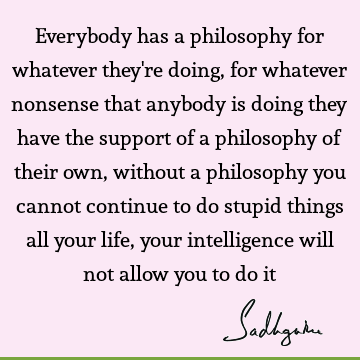 Everybody has a philosophy for whatever they're doing, for whatever nonsense that anybody is doing they have the support of a philosophy of their own, without a philosophy you cannot continue to do stupid things all your life, your intelligence will not allow you to do it

The filthier the situations you live in, the wiser and more beautiful you can become if you are willing & if your intelligence is functioning; if you are not reacting, but responding to life consciously. If you are reacting to filth, you will become filth

If your doctor told you that you are going to die tomorrow, that you can't live for more then 24 hours, you will see you will transform yourself so rapidly; minute to minute you will change. So don't wait for your doctor to tell you something horrible (change by yourself)

When you came into this world, you came without a single investment. So whatever happens in your life, anyway you are in profit.