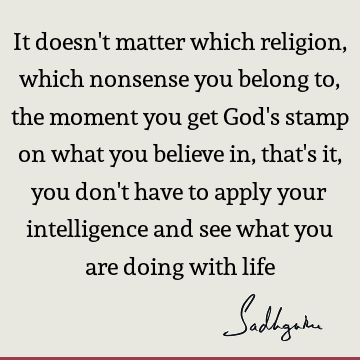 God is not a reality in your life; it is just a belief. What kind of God you believe in is just what kind of social situations you have been brought up in

When you identify yourself with an ideology or a belief system; slowly your brain is turning into a concrete block. Calcification is happening, that’s why we call you a bonehead; How efficiently it happens depends on the efficiency of the preacher or the teacher. If he is very efficient, you will be a solid block where nothing goes in, nothing goes out

Thought can come to you as simply gossip- It is harmless. Or as an ideology- now it's little strong, or as a philosophy- it's much stronger, the worst form is when it comes to you as the word of God, you cannot deny even the silliest thought. You have lost even the discriminatory process that you cannot even see this is stupid. It's stupid but it's holy