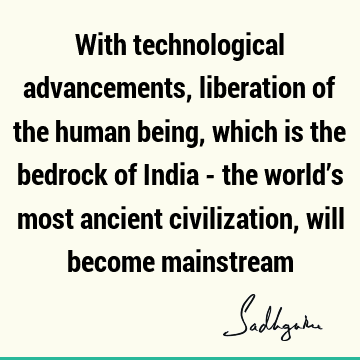 With technological advancements, liberation of the human being, which is the bedrock of India - the world’s most ancient civilization, will become mainstream

The whole art of being a Guru is just this: to constantly puncture people’s ego and still manage to remain their friend.

The yogic system is about enhancing your perception. The divine should not be an imagined hope - it should become a living reality for you

Learning to live with the reality is the most important dimension. If you stop distorting things in your mind and just see everything the way it is, mukti is just one step away. You don’t have to do anything. Just time will mature you into another place.

The reminder of one's mortality has always been the fundamental force behind the human search for something beyond. If they never knew that they would die, nobody would seek spirituality.

Spiritual process is not for the dead or the dying; it is for the living who want to become fully alive in all dimensions of life

With gratitude for everything, success and victory will be yours