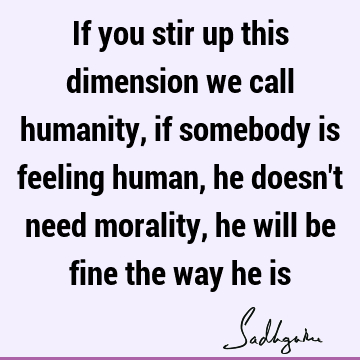 If you stir up this dimension we call humanity, if somebody is feeling human, he doesn't need morality, he will be fine the way he is

Youth is humanity in the making. If something is in the works, the more attention you pay to it, the better the product will be

All predictions are an insult to humanity, that means there is no value for what a human being is.

If you function with your humanity, not fixing your actions but only looking for a consequence, that is best for everybody, whatever is needed you will do and that's how it should be

People have put their humanity to sleep and trying to behave like human beings with morality and it's not working because everybody will come up with his own morality. And your kind of morality and another person’s kind of morality is at war all the time. What is right and wrong, if you open this debate you will end up with a fight