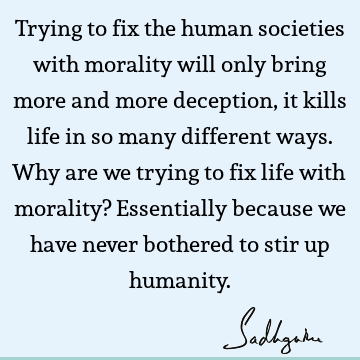 Trying to fix the human societies with morality will only bring more and more deception, it kills life in so many different ways. Why are we trying to fix life with morality? Essentially because we have never bothered to stir up humanity.

Do not try to build your life on ethics, morality or values. Bring clarity of perception into your life. Learn to see everything just the way it is

If your humanity is in full flow, you will reach out to life around you. This is not morality - this is the nature of being human

People have put their humanity to sleep and trying to behave like human beings with morality and it's not working because everybody will come up with his own morality. And your kind of morality and another person’s kind of morality is at war all the time. What is right and wrong, if you open this debate you will end up with a fight

If you stir up this dimension we call humanity, if somebody is feeling human, he doesn't need morality, he will be fine the way he is

This piece of life is a complete entity by itself. Why is it feeling incomplete? And why is it trying to fulfill itself by making a partnership with another piece of life? Fundamental reason is that we have not explored this life in its full depth and dimension