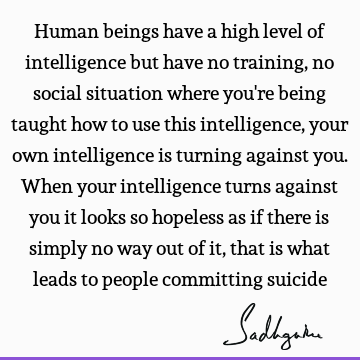 Human beings have a high level of intelligence but have no training, no social situation where you're being taught how to use this intelligence, your own intelligence is turning against you. When your intelligence turns against you it looks so hopeless as if there is simply no way out of it, that is what leads to people committing suicide

Most human beings have not been taught how to handle their own intelligence, if you had half the brain that you have, you would have no mental ailments

Every child does have the necessary intelligence to live his life fully. You just create an atmosphere for him to grow into his intelligence, rather than imposing your nonsense upon him.

Nature has evolved us to a higher level of intelligence and awareness, but we are refusing to accept the promotion

The filthier the situations you live in, the wiser and more beautiful you can become if you are willing & if your intelligence is functioning; if you are not reacting, but responding to life consciously. If you are reacting to filth, you will become filth