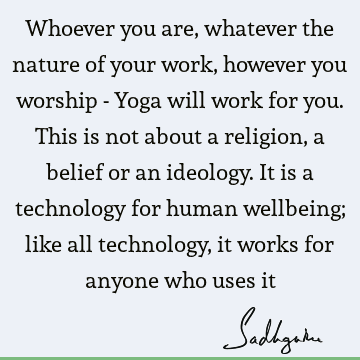 Whoever you are, whatever the nature of your work, however you worship - Yoga will work for you. This is not about a religion, a belief or an ideology. It is a technology for human wellbeing; like all technology, it works for anyone who uses it

Yoga predates religion; beyond religious divide, yoga is the science of well-being.

The word yoga means union. Yoga is not a religion. We looked at the Universe and saw union

yoga as a process, yoga as a method, yoga as a technology, yoga as a science is essentially to break the limitations of a certain concretization that happens, which we call as personality - to evolve from being a person to a presence.

No matter where you are or who you are, may you never be a prisoner of your own body, mind & emotions. May you know the power of liberating yourself through Yoga

Unfortunately, if you utter the word Yoga, people think you have to be in some impossible posture, Yoga is not about postures, it is just a minuscule aspect of it, Yoga means in your experience everything has become one. The Word Yoga means Union