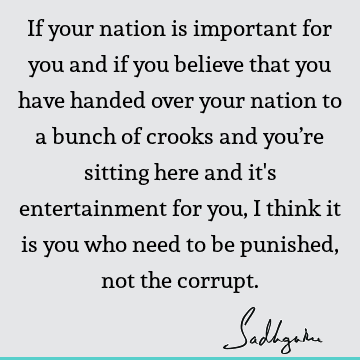 If your nation is important for you and if you believe that you have handed over your nation to a bunch of crooks and you’re sitting here and it's entertainment for you, I think it is you who need to be punished, not the corrupt.

keeping the four limbs of the nation limbered up is very important. We must do some yoga with all of them. We must knead them. When you have pain in your limbs, you’ll wish you did not have those limbs, That’s what is happening right now. We wish we did not have them many times because they’ve become such a pain.

It is important to understand that though yoga is Indian in origin, it is universal in appeal

There is a distance between possibility and reality. Definitely it's a great possibility. We are sitting on the threshold but do not underestimate our ability to goof things up

You don't have to talk about marriage and divorce in same breath as if they come together. This is a completely American idea