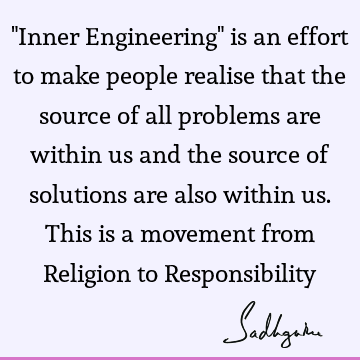 "Inner Engineering" is an effort to make people realise that the source of all problems are within us and the source of solutions are also within us. This is a movement from Religion to Responsibility

Meditativeness means to become in such a way that you are not the source of the problem. Wherever you are, you’re a solution, you’re not a problem.

As human intellect becomes active, heavens are collapsing in people's minds. This is the time to move humanity from Religion to Responsibility. People must know the technology of how to be absolutely blissed out by their own nature. Yoga is that technology

When you lose your peace, you are definitely adding to the problem and not the solution

If you make your process of desiring into a conscious process, then desire is no more a problem, desire is a wonderful vehicle that will take you places