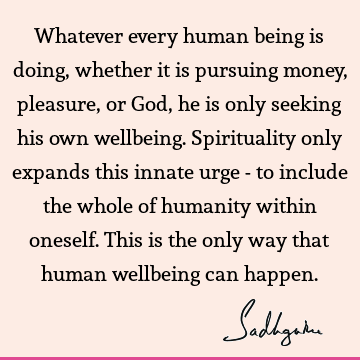 Whatever every human being is doing, whether it is pursuing money, pleasure, or God, he is only seeking his own wellbeing. Spirituality only expands this innate urge - to include the whole of humanity within oneself. This is the only way that human wellbeing can happen.

Youth means wide-open possibilities. I think every human being should stay that way all their lives - constantly seeking and exploring.

The reminder of one's mortality has always been the fundamental force behind the human search for something beyond. If they never knew that they would die, nobody would seek spirituality.