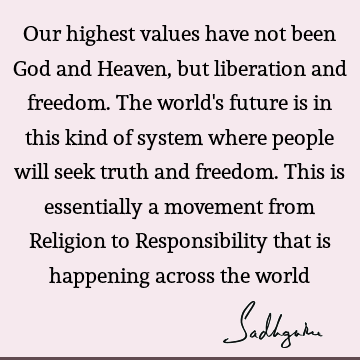 Our highest values have not been God and Heaven, but liberation and freedom. The world's future is in this kind of system where people will seek truth and freedom. This is essentially a movement from Religion to Responsibility that is happening across the world

As human intellect becomes active, heavens are collapsing in people's minds. This is the time to move humanity from Religion to Responsibility. People must know the technology of how to be absolutely blissed out by their own nature. Yoga is that technology

Having children is not about reproduction - you are creating the next generation of people. This is a tremendous responsibility