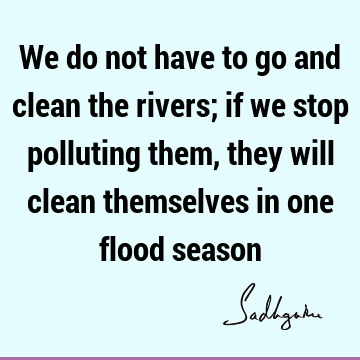 We do not have to go and clean the rivers; if we stop polluting them, they will clean themselves in one flood season

War is the most extreme situation that human beings can create by themselves, for other (extreme) things you need nature's help

A whole lot of people are carrying grave faces as if they are practicing the final posture. Time we work towards life, not death. Because when it comes to death, everybody is a Natural Star.

People are keeping account of their money as if they are going to carry it with them.

A whole lot of people are living like aliens. When you live here without any involvement or belonging, you are an alien, isn't it?