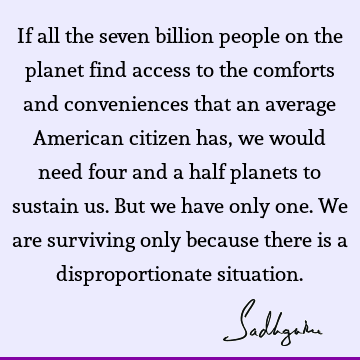 If all the seven billion people on the planet find access to the comforts and conveniences that an average American citizen has, we would need four and a half planets to sustain us. But we have only one. We are surviving only because there is a disproportionate situation.

Additional information/ Source: Book: A Tree Can Save The World; page: 8

Our pursuit of the comforts is so vigorous that the very life of the planet is being threatened. Yet, it cannot be said that we are any happier than our forefathers. This is because people are trying to create an outwardly perfect life. But the quality of our lives is based upon our interiority.

Sun came up on time today morning. None of the planets in this solar system collided today. In the whole universe no accidents, in this endless cosmos no accidents, everything going great but you have one nasty little thought crawling in your head and it's a bad day, you've completely lost perception with life

In the last hundred and fifty years, we have done too many things on the planet. In spite of that, are human beings any happier than what they were a hundred years ago? Comfort has come like never before, but wellbeing has not come.

The way we are treating half the humanity on the planet, it looks like we are hell's angels... we have left a large part of the human population in physical pain. Pain of hunger, disease, and injury.