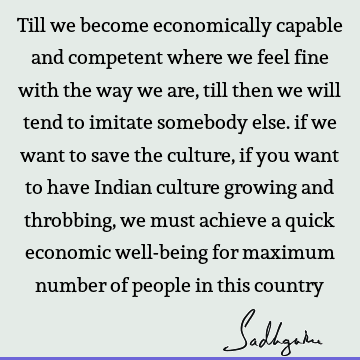 Till we become economically capable and competent where we feel fine with the way we are, till then we will tend to imitate somebody else. if we want to save the culture, if you want to have Indian culture growing and throbbing, we must achieve a quick economic well-being for maximum number of people in this country

In African lore there is a saying, ‘When the lion feeds, everybody else gets fed.’ So if you’re a lion, you have a big capability. When you feed, it is the laws which should make it in such a way, if you make profit, everybody should live well.

If your nation is important for you and if you believe that you have handed over your nation to a bunch of crooks and you’re sitting here and it's entertainment for you, I think it is you who need to be punished, not the corrupt.