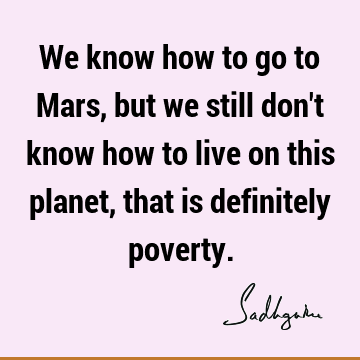 We know how to go to Mars, but we still don't know how to live on this planet, that is definitely poverty.

If something happens, something entirely went wrong & no way to fix 2 people and they went apart, that’s unfortunate, but why should you ever talk about marriage and divorce in one breath? It’s a crime to think on those lines. But if it so happens & they have to separate that will any way inevitably happen. You don’t have to plan it at the time of

War is the most extreme situation that human beings can create by themselves, for other (extreme) things you need nature's help

People are keeping account of their money as if they are going to carry it with them.