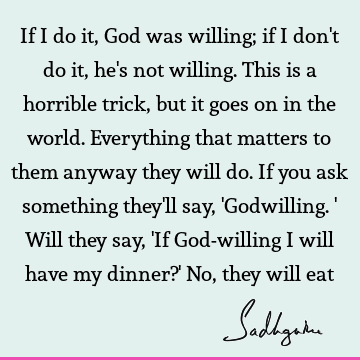 If I do it, God was willing; if I don't do it, he's not willing. This is a horrible trick, but it goes on in the world. Everything that matters to them anyway they will do. If you ask something they'll say, 'Godwilling.' Will they say, 'If God-willing I will have my dinner?' No, they will eat

[About Cloning] There is a pleasurable way of creating children, I don’t see why you’re wasting billions of dollars in a laboratory. I am only talking about when still women are able to bear children. it doesn’t matter what you call it, you’re just producing a human body which is alive - means the life process is there with all the ingredients

Thought can come to you as simply gossip- It is harmless. Or as an ideology- now it's little strong, or as a philosophy- it's much stronger, the worst form is when it comes to you as the word of God, you cannot deny even the silliest thought. You have lost even the discriminatory process that you cannot even see this is stupid. It's stupid but it's holy